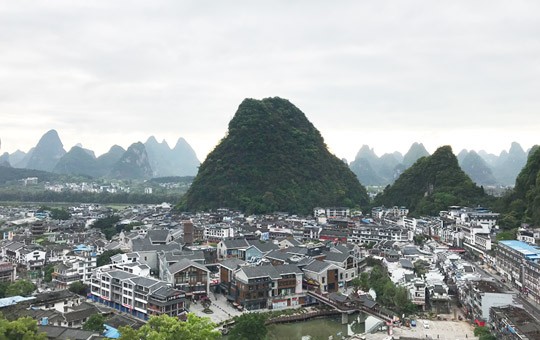 Yangshuo Park is a small, verdant park near West Street in downtown Yangshuo. If you are staying near West Street, this park is a nice place to stroll in the morning or evening.

Yangshuo Park is home to a couple of small but beautiful karst hills. One of them has steps up to a little pavillion on its summit, where you can look out over the town and the karst hills surrounding it. The climb only takes around 10 minutes, but it does involve some steep stairs.

The park is mainly used by locals instead of tourists, so it is quite tranquil compared to other tourist sites around Yangshuo. While walking around the park, you may see some locals enjoying different activities, like taichi, dancing, singing, and chess/mahjong playing; it can thus be a nice place to see a bit of local everyday life.

Being at the center of Yangshuo and close to the West Street, Yangshuo Park can be reached on foot, or via a short bike or taxi ride, from within downtown Yangshuo.