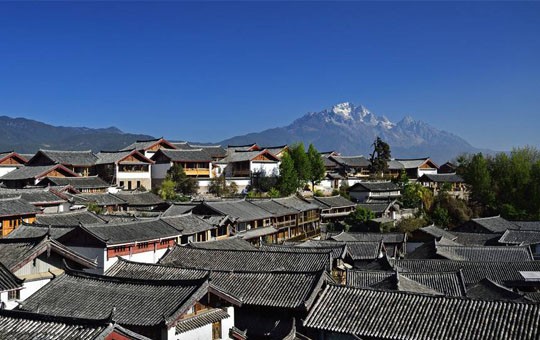 A small prefecture-level city in northwest Yunnan province, Lijiang has become increasingly popular with travelers since its Old Town, i.e. Dayan Old Town, was named a UNESCO World Heritage Site in 1997 and its new airport opened up direct daily flights to major cities around China.

Although much of the city was destroyed by an earthquake in 1996 it was completely rebuilt in the old style. In recent years many new businesses and high quality hotels and resorts have opened up in the area.

Strolling the pedestrian area of this ancient town is a great way to appreciate the charming old town and soak up the local atmosphere. There are various kinds of shops, bars, cafes and restaurants along the streets, making the walk a little noisy but an unique experience with a lot to see and experience. The Lion Rock and Wanfu Tower is a good place to climb up for a great bird's eye view of Lijiang Old Town and the Jade Dragon Snow Mountain in the distance.

Mufu Palace, once the home of Naxi's ruler, is a beautiful, reconstructed palace on a small hill overlooking Lijiang Old Town and offers a tranquil place to stroll.

Lijiang's night life is one reason why many foreign tourists now opt to stay in more remote places, such as hotels at the outskirts of Lijiang, or else the nearby town of Shuhe. Nonetheless, it's worth checking out this spectacle if you want to see or meet young Chinese people having fun. 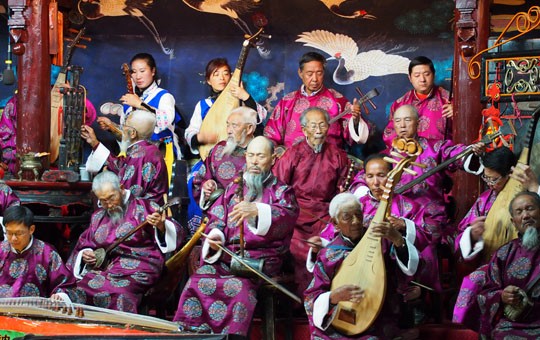 Most of the bars charge for a bucket of beers or drinks by the bottle, so the price to get in can be a bit high. Make sure you understand when you go in what you are committing yourself to pay. It's equally entertaining just to walk the streets and peer in the open windows and doors of the clubs.

Lijiang is home to the Naxi minority people, and there is an excellent musical show in the evening which highlights this tradition. This Naxi ancient music concert in the evening offers a taste of Naxi music and instruments. Naxi music is a type of folk music unique to the Naxi people in Lijiang area of Yunnan Province. The orchestra in Lijiang has 26 performers aged from 40 upwards, including a few octogenarians. They play ancient instruments and songs of the Naxi minority people which date back many centuries, transcending the language barrier. Each song is introduced by the the host who speaks in both Chinese and English.

Lijiang is also a good base for further exploration and day trips. You don't even have to stay in Lijiang itself, as there are plenty of quieter, alternative bases nearby, such as the village of Shuhe. While the old town is well worth visiting, you may like to retire to a more quiet area to get a good nights rest, as Lijiang's central area has an active night life scene. Lijiang was traditionally the home of the Nakhi minority and you can still see Nakhi residents going about their business in Lijiang and the surrounding smaller villages.