Top 10 Desserts You Have to Try in China 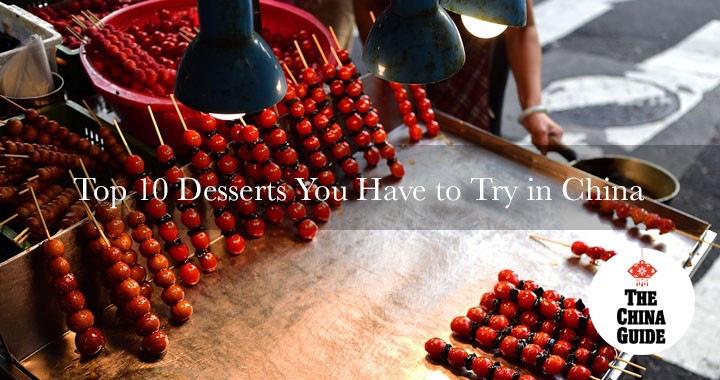 While dessert may not be the first food item that comes to mind when thinking about China’s age-old culinary tradition, sweet treats are actually very common in the Middle Kingdom, especially around holidays like Lunar New Year. And forget the fortune cookie—a unique invention of the Chinese diaspora in the west—desserts in China are way more varied and sometimes downright unusual in comparison!

While sesame, bean paste, and glutinous rice flour are a few common ingredients, Chinese desserts come in countless varieties that are sure to satisfy your sweet tooth. The options are endless, but we’ve narrowed this list down to our ten favorite desserts that you must try during your trip to China. 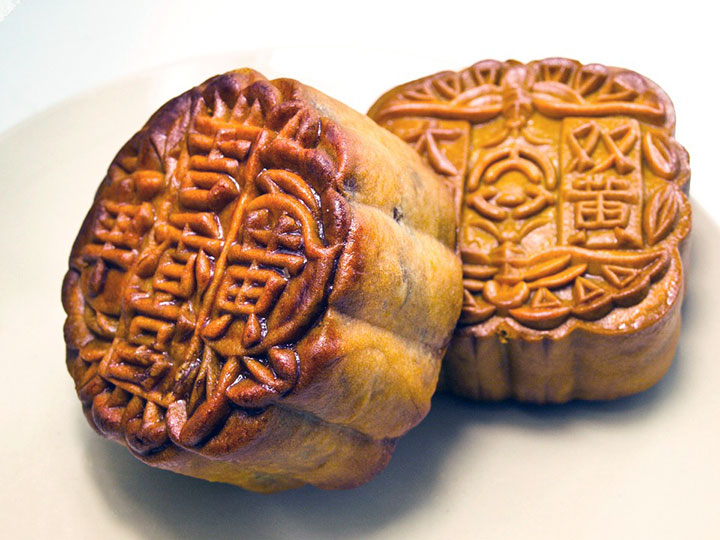 No Chinese dessert is more quintessential or better-known than the mooncake, or yuèbǐng, traditional pastries recognized by the intricate designs containing Chinese characters imprinted on their tops. These flaky cakes with sweet paste fillings are traditionally eaten around mid-Autumn Festival. Also called the Moon Festival, this holiday is all about lunar appreciation and corresponds with a full moon in late September or early October. The best way to celebrate is by doing some moon-gazing and sharing lots of delicious mooncakes with your friends and family.

Mooncakes consist of a flaky, tender crust and can include various fillings. The two most common and traditional fillings are red bean paste and lotus seed paste, sometimes with an egg yolk in the middle to represent the moon. These rich, dense pastes can be an acquired taste, so those who prefer something more conventional can opt for mooncakes with custard or shredded coconut filling instead. 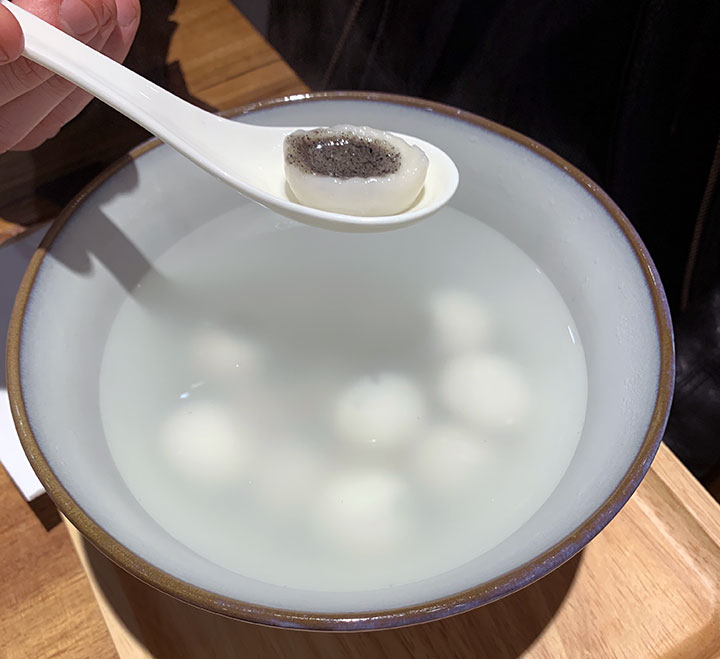 Tāngyuán, which literally translates as “soup ball,” is a popular Chinese dessert that consists of little balls made from glutinous rice flour cooked and served in a sugary broth. The doughy balls are traditionally filled with a black sesame paste, but other common fillings include red bean paste, peanuts, and even chocolate.

Tāngyuán is particularly popular around Lantern Festival, which falls on the fifteenth day of the lunar calendar and marks the end of the Lunar New Year celebrations. Because its name sounds similar to the word for union (tuányuán), tāngyuán is traditionally eaten during wedding celebrations and reunions as well. Today, this popular treat is eaten year-round and comes in a huge number of varieties (and colors!) 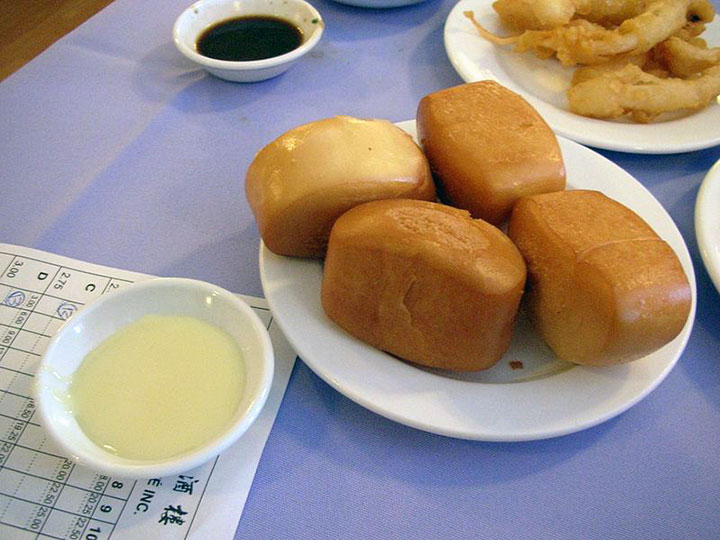 Mántou is a simple but delectable treat that has been enjoyed in China for centuries. Thought to originate as far back as the Han Dynasty (206 BC-220 AD), mántou was once a staple food of northern China and continues to be one of the area’s most popular dishes. Mántou consists of steamed buns usually in the shape of a large marshmallow that can be enjoyed with savory or sweet foods. The dessert version is often deep-fried and is served with sweet condensed milk, making for a delectable, donut-like consistency that is hard to resist. 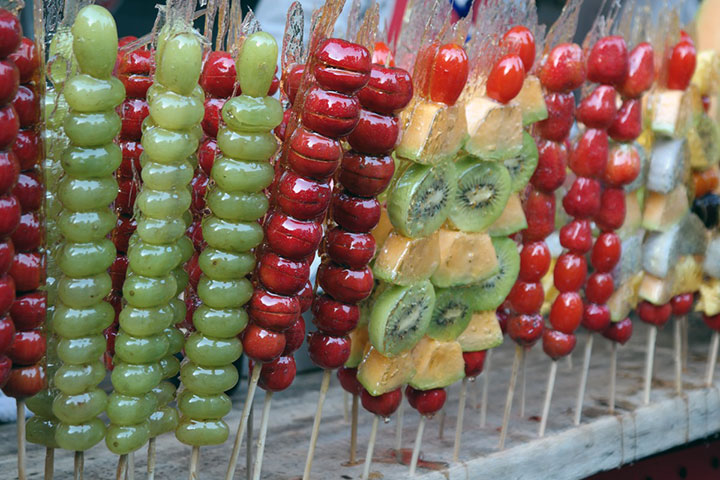 A common sight along any Beijing street, particularly during wintertime, are street vendors selling tánghúlu. The local take on the caramel apple, this typical Beijing treat consists of Chinese hawthorns, much like little crab apples in taste and consistency, skewered on a stick and coated in a hardened, sugary syrup. Makers commonly replace the pit in the center of the hawthorn with red bean paste, making this dessert even sweeter.

Although it originated in northern China, tánghúlu can now be enjoyed in pretty much any area of China. And today’s tánghúlu makers are taking this sugary snack to new, more adventurous places. In addition to its traditional ingredient of hawthorns, you can find tánghúlu made with any number of fruits, including oranges, strawberries, pineapple, grapes, and even cherry tomatoes. 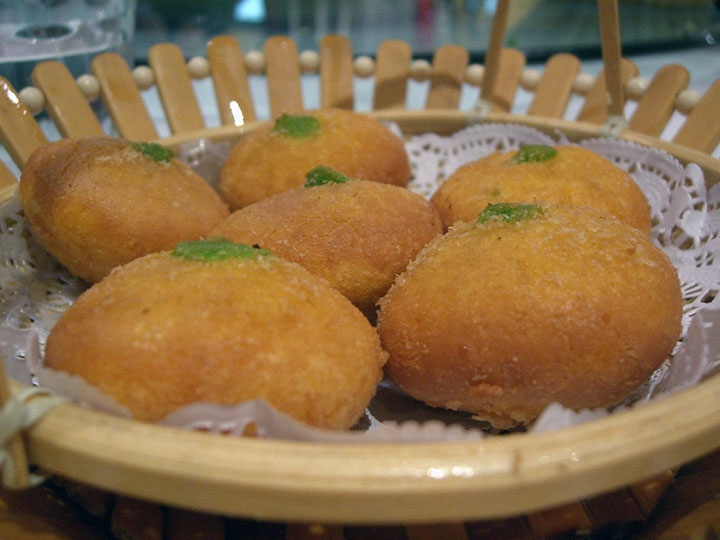 Hailing from the southern province of Sichuan, this yummy, hearty dessert is a great option for those missing the flavors of home. Made from everyone’s favorite autumnal ingredient, these little pan- or deep-fried cakes consist of pumpkin paste, sugar, and glutinous rice flour, and are sometimes stuffed with a little bit of red bean paste—they’re simple but delicious! Crispy on the outside but warm and doughy on the inside, this southern favorite will become one of yours after the first bite. 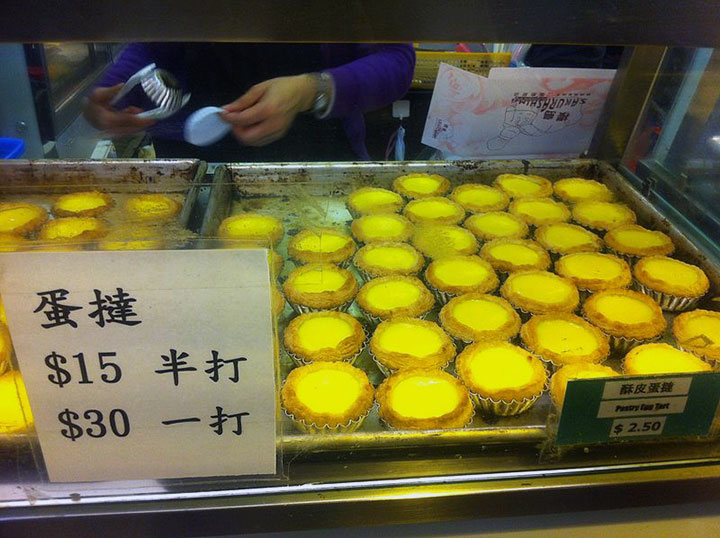 First introduced to Macau by the Portuguese, the egg tart is now a classic Chinese dessert that has gained popularity across Asia. The egg tart first took off in the port city of Guangzhou in the 1920s, and the rest is history. This Cantonese specialty tastes much like your standard custard tart, with a crispy, flaky outer crust and a rich, creamy egg custard filling.

While most common in Hong Kong and the southern reaches of China, egg tarts are popular all over the Middle Kingdom and can be found in pretty much any bakery, not to mention some convenience stores and fast food restaurants. Like many other tarts, this scrumptious after-dinner treat is best enjoyed straight out of the oven. 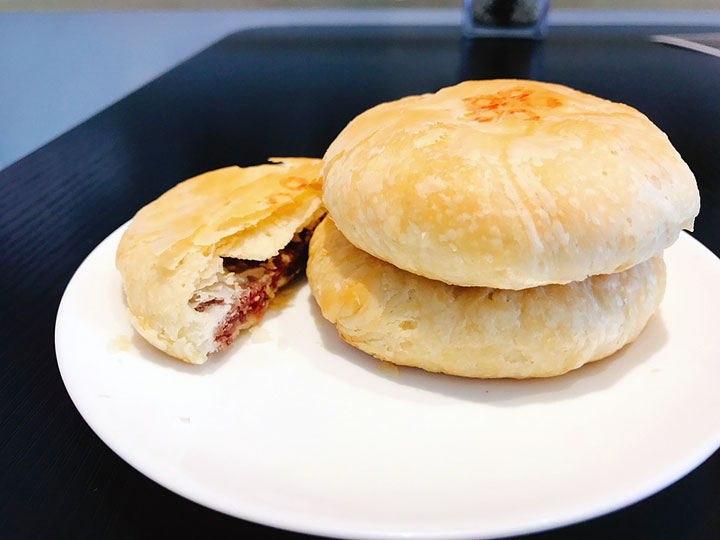 Home to dozens of minority groups, the southern province of Yunnan is a veritable melting pot, and its diverse and varied cuisine is a testament to this. An amalgam of different dishes and cooking styles, Yunnan cuisine features both traditional Han-style food and some traditions that are all its own, one of which is the common use of flowers as a cooking ingredient. Nowhere is this unusual ingredient better featured than in Yunnan’s favorite dessert, the flower cake.

This unique dessert consists of a thin, flaky pastry filled with sweetened rose petals, which are traditionally thought to have various health benefits. The roses included in this dessert are grown right in the region and are meant to be eaten, and they make for a delicious and one-of-a-kind treat that all visitors to Yunnan have to try! 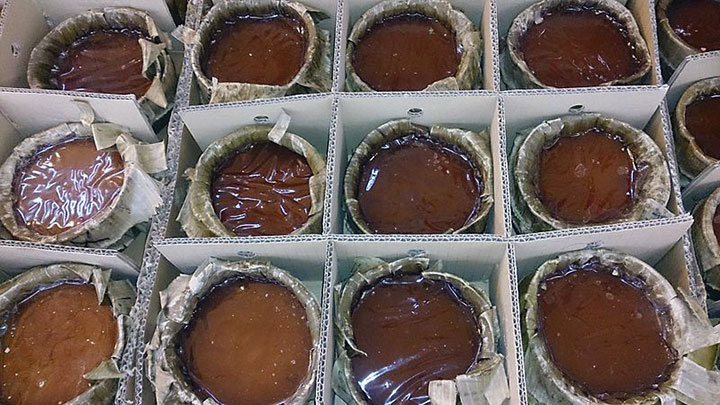 Chinese New Year is China’s longest and most important annual holiday, and holidays in China (like elsewhere in the world) are notoriously dessert-heavy. Of the many treats associated with the Lunar New Year, nothing is more quintessential than niángāo, a sweet cake made with glutinous rice flour. Commonly flavored with brown sugar, niángāo is a molten, chewy treat reminiscent of taffy but softer in texture. It can be cooked in a variety of ways, depending on where you are in China, from the steamed, sticky Cantonese variety to the pan-fried version of the North.

Niángāo’s popularity is due in part to its auspicious sounds—niángāo literally means “higher year,” signifying that one will ascend to new heights in the new year by partaking in this yummy dessert. Because of this, niángāo is a popular gift during new year celebrations, and is often made into a variety of lucky shapes in order to bring good fortune to its recipients. 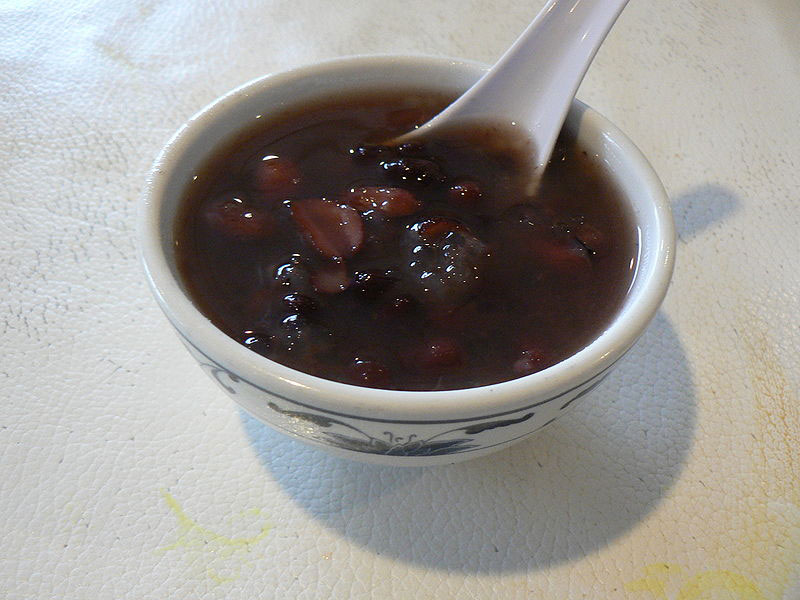 Sweet soups are a unique feature of Chinese cuisine, and none is more popular than red bean soup. Often served hot in the winter and cold in the summer, red bean soup is a simple and adaptable treat that makes for the perfect post-dinner snack. The soup is made with red mung beans, which are soaked overnight and then cooked with tangerine peels and lotus seeds. Some garnish the dish with milk, glutinous rice balls, and other ingredients. The soup is not overly sugary and its sweetness does not overwhelm the beans’ characteristic taste, making this a great dessert option for those with a milder sweet tooth. 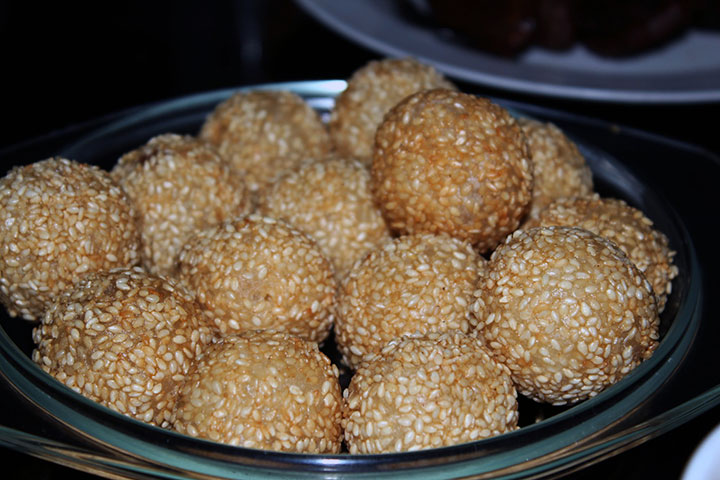 Jiān duī is a common dessert pastry found throughout China that dates back to the Tang dynasty (618-907 AD), when it was a popular dish eaten at the emperor’s palace in the capital of Chang’an, near modern-day Xi’an. Today’s jiān duī consist of deep-fried glutinous rice flour filled with lotus paste or bean paste and covered in sesame seeds. These sesame-covered spheres have a crispy outer layer and delectably chewy inside and are a popular feature of bakeries throughout China. Those in cities in the US are likely to find them in their local Chinatown too.

With all of these delicious desserts, you will certainly not lack for options when seeking out sweet snacks during your visit to China. The difficulty will be choosing! ■