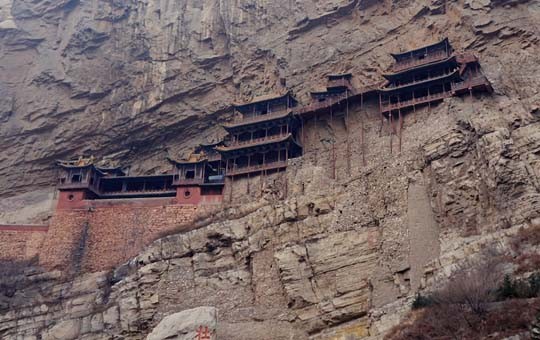 China’s temples are known the world over for their architectural design and beauty, but none surpass Hengshan Hanging Temple in terms of uniqueness. That’s because this one-of-a-kind temple, also known as Xuankong Temple, is built into the side of a cliff 50 meters off the ground.

This ancient wooden structure is a popular sight for Chinese and foreign travelers alike due to its unique cliff-side position, which earned it a spot in Time Magazine’s 2010 list of the top 10 most precarious buildings. Even if you are scared of heights, this is one experience that you should not miss.

It is a bit of a climb to get up to the temple, but it’s definitely worth the hike to see the beautiful Chinese architecture and intricate designs within the temple’s many rooms. A maze of steps and passageways along the cliff lead from one prayer hall to another, including Changxian Bridge, a walkway suspended at a dizzying height that connects the northern and southern sections of the temple.

Given its precarious position, it’s hard to believe that Hengshan Hanging Temple has stood the test of time. Against all odds, and due to regular maintenance efforts, however, the temple has been standing (or hanging, as it were) for more than 1,500 years. Xuankong Temple was first constructed during the Northern Wei Dynasty (386-534 AD), undergoing a major restoration in 1900.

Hengshan Hanging Temple is known not only for its architecturally daring construction, but also for its religious influences. In fact, this temple is one of the few in the world to bring together three disparate religions, as Buddhism, Confucianism, and Taoism are all practiced here.