Located in the heart of Sichuan province, Chengdu is home to one of China's—and the world's—best-loved mammals: the giant panda. Apart from being the best place in China to see and interact with pandas, Chengdu is also a cultural melting pot. Influenced throughout its long history by Tibetan and Mongolian cultures, Chengdu's intriguing past has left its mark on the city's food and culture, and is evidenced in its many temples, fascinating archaeological sites and museums.

There are several places visitors can go and see pandas while in Chengdu, but the most convenient and popular panda sanctuary is the Chengdu Research Base of Giant Panda Breeding, also known as Chengdu Panda Base. This base is just outside downtown Chengdu and covers an area of more than 90 acres designed to resemble the pandas' natural habitat. Most importantly, being a panda breeding center, Chengdu Panda Base houses pandas of all ages, including lots of adorable panda cubs.

Pandas aren't the only giant resident of Sichuan. About a two hours' drive from downtown Chengdu lies the Leshan Giant Buddha, the largest stone Buddha statue on the planet. At a height of over 70 meters, this 1,000-year-old stone statue makes for an imposing figure and is another must-see for visitors to Chengdu.

Within the downtown area of Chengdu, Wenshu Temple deserves a visit for its beautiful, well-preserved architecture and tranquil garden. Kuaizhai Alley and Jinli Cultural Street are two interesting and historic pedestrian streets, where you can try some local Sichuan snacks, shop for souvenirs, and people watch. A little farther away from the city center, the fascinating Jinsha Site Museum offers history buffs an interesting glimpse into the exotic ancient Shu Kingdom that existed from 1200 BCE to 650 BCE in the Chengdu area.

Chengdu is known for its laid-back pace and tea culture, and there is no better way to experience Chengdu's relaxed way of life than by strolling through Renmin Park and drinking a cup of jasmine tea in one of its teahouses, while watching the local people chatting and having fun.

We usually recommend spending 2 to 3 days in Chengdu to cover the city's highlight attractions, including seeing giant pandas, the Leshan Giant Buddha, and some other attractions around the downtown area. If you want to visit Jiuzhai and/or Huanglong Valley from Chengdu, it normally requires 2 or 3 extra days due to the long distance and immense area of the parks. If you are planning a trip to Chengdu, please check out the popular sights and activities here and our most popular Chengdu itineraries here, or you can simply ask us to customize a China itinerary for you.

With Sichuan cuisine being one of the eight main cuisines of China, food should play a role in any visit to Chengdu. In fact, in 2011, UNESCO declared Chengdu a "City of Gastronomy." Some notable dishes include Chengdu Hot Pot, Huiguorou (boiled and then stir-fried pork), Mapo tofu (tofu served in a spicy sauce containing pork, broad bean, and Sichuan peppercorns), Kung Pao Chicken (spicy diced chicken cooked with red pepper and peanuts), and Hongyou Chaoshou (Sichuan's take on the dumpling).

Jinli Cultural Street and Kuanzhai Alley are full of restaurants and food stalls, and thus are two good places for visitors to sample some of Chengdu's local dishes and snacks.

There are more teahouses in Chengdu than anywhere else in the world. With an estimated 10,000 teahouses, it is easy to think that there might be a teahouse on just about every corner. Joining the locals and sipping a cup of tea while watching a traditional Sichuan Opera face-changing show in one of Chengdu's traditional teahouses is a great way to soak up the local atmosphere and relax for a couple of hours after a day of sightseeing.

Jinli Cultural Street and Kuanzhai Alley are bustling and active in the evening, and there are lots of things to see and do here, whether it's trying some street food, bargaining some souvenirs, or just people watching. There are several bars along these streets where you can have drinks and enjoy some live music.

Weather in Chengdu is mild, humid, and cloudy; the city sees 250-300 overcast days a year! It is best to visit Chengdu in spring (March to May) or autumn (September to November) to enjoy pleasant temperatures and clear weather. Avoid traveling to Chengdu from June to August, as it gets very hot and steamy, and sees a lot of rainfall in the summer. Winter (December to February) in Chengdu is humid and cold, and is thus not the most pleasant time for traveling. 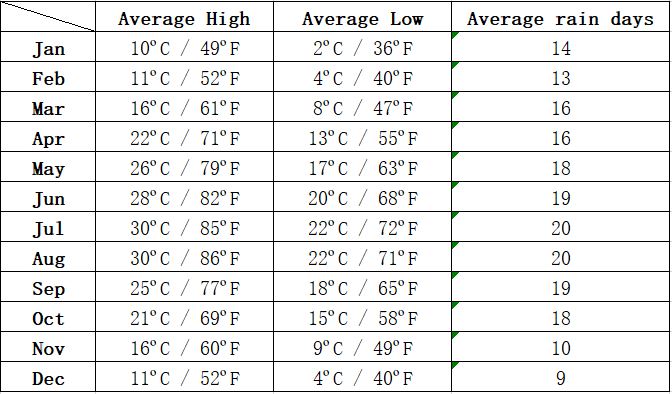 Located 16 km southwest of downtown, Chengdu Shuangliu International Airport is the region's largest airport, with internal flights to/from all major cities in China as well as many international destinations. Flight time between Chengdu and Beijing, Guangzhou, or Shanghai is around 3 hours. You can also fly from Chengdu to the Tibetan capital of Lhasa in roughly 2.5 hours, and from Chengdu to Kunming in around 1.5 hours.