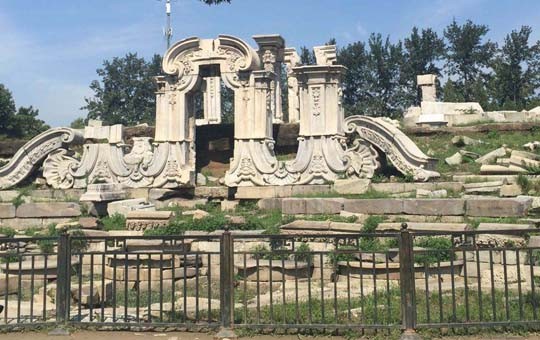 The Old Summer Palace grounds, known in Chinese as Yuanming Yuan, are about the same size as Central Park in New York and date back to the 12th century.

The interesting part of the palace's history begins with Emperor Qianlong, who was inspired by French and Italian palace architecture. Between 1747 and 1759, under the direction of Italian Jesuit Guiseppe Castiglione, Emperor Qianlong had palaces built to replicate those in Europe, which were then decorated with furniture imported from Europe. There were even mazes in the garden which you can still walk through today.

The palaces were later destroyed by French and British troops during the Second Opium War (1860-1862). Today, all the Old Summer Palace offers are the ruins of the grand palace and a large garden with lakes, trees, and trails. The big lake in the center also has boats for rent.

The Old Summer Palace is popular among Chinese tourists because of its history. But for foreign travelers, there is no much to see or do here. If you want to see a traditional imperial palace and park, then the Summer Palace would be a better choice.

The Old Summer Palace can be easily accessed from Yuanmingyuan Park Station on Line 4 of the Beijing Subway.