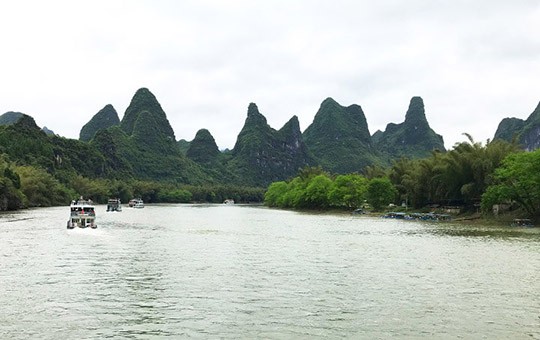 Departing from Guilin daily, many cruise ships make their way downstream along the scenic Li River to Yangshuo. This cruise is well-known as a highlight of a tour to Guilin and will reward you with the jaw-dropping views of the karst peaks that the area is famous for, including the scenery that appears on China's 20 RMB banknote.

The ships usually depart from Zhujiang Wharf or Mopan Hill Wharf on the outskirts of Guilin. Both of the river wharfs are a 30-minute drive from downtown Guilin, so it is safest to allow a full hour for transportation from downtown to the wharfs. All ships leave in the morning between 9:30am and 10:00am. In order to catch the morning cruise, you usually need to spend the previous night in Guilin.

Depending on the season and water level, this 83km cruise from Guilin to Yangshuo takes around four to five hours. On some days, if the water level is too low or too high, they may only be able complete part of the cruise, and ticket prices will be adjusted accordingly.

A short while after the ship departs from Guilin, you will find yourself cruising through the beautiful karst peaks along the Li River. The most picturesque section of the cruise is from Yangdi to Xingping, where the karst peaks most densely line on the banks. Prepare to stand on the upper deck and enjoy the stunning 360-degree scenery. Near Xingping, you will also get to see the famous mountains that appear on the 20 RMB banknote. After Xingping, i.e., for the last hour of the cruise, there will be little to see. You can go back to your air-conditioned seat and rest before arriving in Yangshuo.

Free tea is provided on the ships. There are also drinks or snacks that you can order at touristy prices. The ship toilets are clean, but you may have to wait in line.

Besides the cruise ships, there are also small motorized rafts at other wharfs available for visitors to do part of the cruise, but they do not travel all the way from Guilin to Yangshuo.

You need to take luggage on board if you want to spend a couple of days in Yangshuo. If you are on one of our tours, your driver will transport your luggage to your hotel in Yangshuo, so all you need to do is sit back and enjoy the scenery along the cruise.

Best Time for the Cruise

Winter, from December to February, is not the ideal season to appreciate the beauty of the Li River, as the water level could be low and the karst peaks are not as green as during the rest of the year. Spring, summer, and fall all make for a lovely time to visit the Li River. The best scenery is usually when there is some rain and the tops of the karst peaks are covered with a thin wisp of fog or clouds, a scene that is often depicted in traditional Chinese paintings. We suggest bringing an umbrella since the upper deck of the ships has no roof.

There are steps along the walkway from the ticket entrance to the ships. There are also gaps between the ship and the platform that make boarding or leaving the ship difficult for those in wheelchairs. Therefore, this cruise is not suitable for wheelchair users.