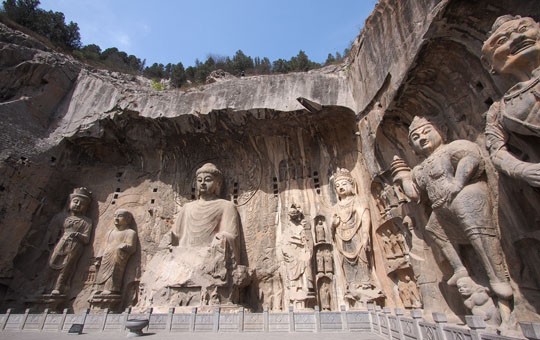 Located about 7.5 miles (12 km) south of Luoyang, the Longmen Grottoes or Longmen Caves feature some of the finest examples of Chinese Buddhist sculptures. In 2000 the site was inscribed as a UNESCO World Heritage site for its outstanding manifestation of human artistic creativity.

While many of the statues were weather damaged, destroyed by various anti-Buddhism campaigns, and looted by Chinese and foreigners, plenty of impressive, well-preserved statues remain today. Among them, the ones in Fengxian Temple Cave are undoubtedly the most magnificent.

Fengxian Temple Cave, or Fengxiansi Cave, the largest of all caves, was carved between 672 AD and 676 AD at the orders of Empress Wu Zetian (who later became the first female emperor in the history of China). The cave has nine huge well-preserved statues, ultimate samples of the architectural perfection reached during the Tang dynasty. The main Vairocana Buddha, sculpted on the back wall of the cave, is the largest statue of Buddha at the Longmen Grottoes, with 56 feet (17.14 m) of height and two 6.56 feet (2 m) long ears. The Vairocana Buddha displays a peaceful and natural expression, and it is speculated that it was carved to resemble the Empress herself.

Other highlights include Qianxisi Cave, Binyang Cave, and Wanfo Cave. All of these can be visited on the way to the Fengxiansi Cave. Visitors should be prepared to do a lot of walking, mostly flat, but with many of the caves requiring climbing steep stairs, particularly Fengxiansi Cave, which has a flight of stairs with 99 steps.

After exploring the grottoes along the west bank, visitors will cross a bridge to enjoy the panoramic view of the grottoes from the other side of the river. After that, visitors can either walk or take a buggy to the parking lot.

The Longmen Grottoes is a top tourist attraction in China and visitors should be prepared for crowds, especially during the annual Luoyang Peony Festival (early April to early May), all Chinese public holidays, and summer break (July to August). We also recommend going in the morning to avoid backlighting.

Note that there is a distance of 1.86 miles (3 km) from the northeast visitor center to the entrance to the scenic area. Those who prefer not to walk can opt for taking an electric cart at an additional cost.