In preparation for the 2008 Summer Olympics, Beijing went all out. Starting as early as 2003, almost $7 billion were spent to construct twelve new sports venues, renovate the airport, expand the subway system, and more to prepare for the games. Beijing's Olympic Green, also known as Olympic Park, is where many of the new venues were built and is a must-see for sports fans and architecture aficionados alike.

Located north of downtown Beijing along its central, north-south axis, the Olympic Park is home to the most recognizable venue from the 2008 Olympics: the National Stadium. The stadium, nicknamed the Bird's Nest due to its intricate structure of interweaving metal beams, is a stunning example of modern sports architecture. It wowed spectators at the opening and closing ceremonies of the 2008 Summer Games and will do so again for the 2022 Winter Games. The stadium is now used for occasional commercial events. 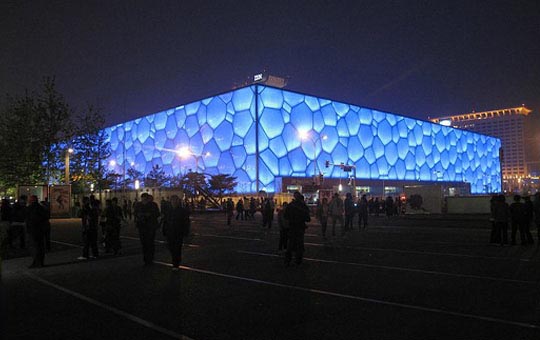 Beside the Bird's Nest, the National Aquatics Center (or Water Cube), which served as the site of the 2008 games' swimming, diving, and other water-based events, can also be found in Olympic Park. This building is covered with a unique, bubble-like outer membrane, which is particularly impressive at night when it lights up and changes color. As of 2010, the Water Cube also features an indoor water park, spa facilities, and various restaurants, making for a fun, family-friendly activity.

While the Olympic Park is huge, most visitors stick to the square where the Bird's Nest and the Water Cube are located, where you can appreciate the two iconic stadiums from the outside. If you pay a fee, you may also visit the inside of the stadiums and take an elevator to the roof of the Bird's Nest for a panoramic view of the surrounding area.

If you visit in the evening, you will get the unique opportunity to see the stadiums lit up in beautiful colors. Many locals also come to the square for singing, dancing, badminton, inline skating, and other fun activities at night, offering plenty of good people watching opportunities.

There are small shops inside the park selling snacks, drinks, and souvenirs.

Around 2 km to the north of the Bird's Nest lies Olympic Forest Park, which is a great place to escape the hustle and bustle of the city and a popular exercising spot among locals. If you live nearby, you can enjoy a jog or stroll around the park's many lakes and ponds in the morning or evening.

You can easily reach Olympic Park via subway line 8 or 15. The closest stop to the Bird's Nest and Water Cube is Olympic Sports Center on subway line 8. Use exit B1 or B2.