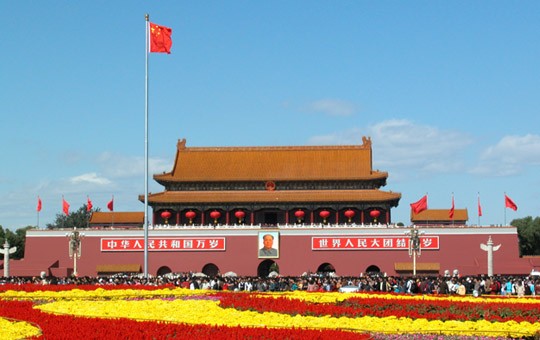 Tiananmen Square (literally "Square of the Gate of Heavenly Peace") is one of the largest public squares in the world. It lies at the center of Beijing's historical north-south axis that runs through the Temple of Heaven and the Forbidden City. The square is in front of the Forbidden City and has a number of sights of its own, including the Monument to the People's Heroes, the Great Hall of the People, the National Museum of China, and the Mausoleum of Mao Zedong. The historical, cultural, and political significance of the square makes it a must-visit sight in Beijing.

A vast landscape of pavement, Tiananmen Square takes up more than 400,000 square meters and can hold over one million people. In addition to the simply awe-inspiring space, the square is an ideal place to take pictures of Tiananmen Gate (the "Gate of Heavenly Peace"), one of the most symbolic buildings in China.


Other highlights of a trip to Tiananmen Square include the flag raising and lowering ceremonies at sunrise and sunset, respectively, as well as the changing of the guard at specific times throughout the day. Be aware that these ceremonies are incredibly popular with domestic Chinese tourists and it is often difficult to secure a good position for viewing the ceremony.

Chinese tourists from around the country descend on Tiananmen Square to take their photos in front of the portrait of Chairman Mao. Some of these tourists are from distant rural areas and may rarely see non-Asian faces in their hometown, so be prepared for some of them to take photos of you or ask you to take photos with them

Note that walking around the square can be extremely hot during the summer, as there are no trees or shade. Remember to wear a hat, apply sunscreen, and bring plenty of water. There are shops and toilets around the perimeter of the square, so if you need to buy a bottle of water or go to the bathroom, do so before entering the square.

All visitors to Tiananmen Square must enter from one of several specific entry points, all of which have airport-level security, including metal detectors and x-ray machines. You may be asked for ID, so it is advisable to bring your passport as well. Be aware that Tiananmen Square is a political place that is regulated by the government and the police and sometimes subject to temporary close without prior notice.

Most people visit Tiananmen Square on their way to the Forbidden City, and the two sights can be done together in a morning or afternoon.

The best times to visit Tiananmen Square are at sunrise or sunset, when the guards raise and lower the national flag. During holidays like National Day or May Day, Tiananmen Square is decorated with beautiful flower beds, which makes for a good photo opportunity. However, the square will also be very crowded at this time of year. The square is also very impressive at night time when the surrounding buildings are illuminated.

Located at the very center of downtown Beijing, Tiananmen Square can be reached on Subway line 1 via Tiananmen East and Tiananmen West stations.