Home to China's first national forest park, the Wulingyuan Scenic and Historic Interest Area, Zhangjiajie boasts some of the most spectacular natural sceneries in China, made up of over 3,000 pillar-like mountains. These jaw-dropping mountains are covered with dense vegetation and are known internationally as the inspiration for the "floating mountains" seen in the film Avatar. Because of its stunning landscapes, Zhangjiajie's Wulingyuan Scenic Area was designated a UNESCO World Heritage Site in 1992. 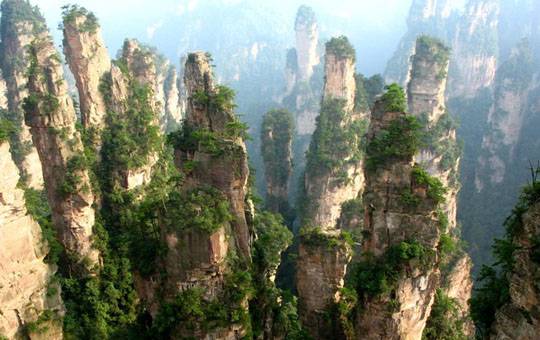 The highlight of any visit to Zhangjiajie is no doubt the Zhangjiajie National Forest Park, the most scenic part of the larger Wulingyuan Scenic Area. The most notable geographic features of Zhangjiajie National Forest Park are the pillar-like rock formations that are seen throughout the park, including the 150-metre Southern Sky Column, which is said to have inspired the floating rocks in the film of "Avatar" and thus has been officially renamed "Avatar Hallelujah Mountain." Apart from its stunning mountains, the park also features thrilling and scenic cable car rides and the world's tallest outdoor elevator (Bailong Elevator).

Another popular sight that Zhangjiajie has to offer is Tianmen Mountain. This one-of-a-kind mountain features a unique huge natural hole in its base and a scenic garden at its summit. Parts of the walkway at the mountaintop are built onto the cliff face, including some sections with glass floors, which can be a fun and exciting challenge for visitors. 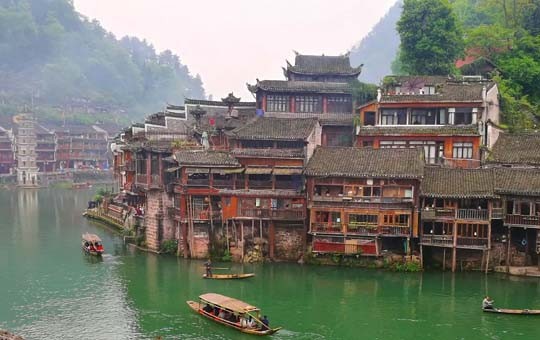 About a 3.5-hour drive southwest of Zhangjiajie, the historic town of Fenghuang is a popular destination that features rich cultural heritage, winding ancient streets, and well-preserved traditional stilt houses, though it is much commercialized. If time allows, you can spend a night here so that you can see the old town when it is spectacularly illuminated at night and enjoy the tranquil atmosphere in the early morning.

Due to the immense size of the Zhangjiajie National Forest Park, visitors should allocate at least one whole day for the park in order to take in the top sights. If you have two days, you can add Tianmen Mountain to your itinerary. For visitors who have three or more days in Zhangjiajie, you might consider spending a night in Fenghuang Ancient Town.

There are other less famous (but still interesting) sights around Zhangjiajie. If you are planning to visit Zhangjiajie on your China tour, please check out the popular sights and activities here and our suggested itineraries here, or you can simply ask us to customize an itinerary for you.

Zhangjiajie is home to the Tujia ethnic minority and the cuisine of this ethnic minority group shares many characteristics with traditional Hunan cooking, including a delicious combination of sour and spicy flavors. The characteristic local dishes in Zhangjiajie include Sanxiaguo (the Tujia take on hot pot), Tuannian (a Tujia dish consisting of boiled radish, bean curd, pork, and cabbage), homemade-style tofu (usually made with a mixture of bean curd and pig's blood), and many more. Some unusual ingredients, like pig intestines, blood, feet, etc., may be used in some local dishes, so be sure to take note of what you're ordering. Please also note that food is usually more expensive within the scenic area than in Zhangjiajie city.

Zhangjiajie offers a couple of entertaining evening shows that give visitors a fascinating glimpse into the culture of the Tujia minority. The most famous one is the Tianmen Fox Fairy Show, an open-air show that uses Tianmen Mountain as its backdrop and combines excellent choreography, singing, costumes, sound, lighting, and special effects. Alternatively, visitors can go for the Charming Xiangxi Show, an indoor theatrical show about the folklore of the Tujia people. During the warmer months, the streets are full of vendors and food stalls, where you can stroll, try some street snacks, and get a glimpse of local everyday life.

Anytime between April and November is great for hiking among Zhangjiajie's peaks. April and October are particularly nice months to visit, as both the scenery and the temperature are ideal. Zhangjiajie's climate is hot and rainy from June to August, but the scenery can be stunning after rain, as the peaks are often dotted with clouds. In the winter months (December to February), temperatures are cold, but lucky visitors may catch the breathtaking sight of the mountains dusted with snow.

Being a smallish city in a mountainous area, there are no bullet trains to Zhangjiajie so far and standard trains take more than twenty hours from Beijing or Shanghai. Zhangjiajie airport is located only 4 km from downtown and there are flights from main cities like Beijing, Shanghai, and Xi'an, making flying the most convenient way to visit Zhangjiajie.