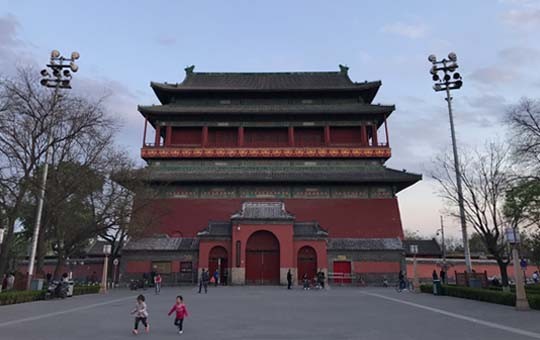 Beijing's Bell and Drum Towers are situated on a small square north of the Forbidden City. The towers, which were used for telling time until 1924, were built in 1272 during the reign of Kublai Khan and were rebuilt after two fires during the Ming and Qing dynasties. The Bell and Drum Towers are quintessential landmarks of historic Beijing and are worth a visit during your exploration of the city's hutong neighborhoods.

Beginning in the Han Dynasty, the system of the "morning bell" and "dusk drum" was adopted, resulting in the construction of bell and drum towers throughout China. Beijing's Bell and Drum Towers are the largest, and the towers once dominated the city skyline.

Less than a hundred meters north of the Drum Tower, you will find the brick and stone Bell Tower, which stands at 33m and is distinguished by its gray walls and green roof. The Bell Tower houses a 63-ton copper bell, the largest in China, hanging from an octagon-shaped bell-cot. Although the bell is no longer rung, there is an introduction inside the tower explaining how it was once used. 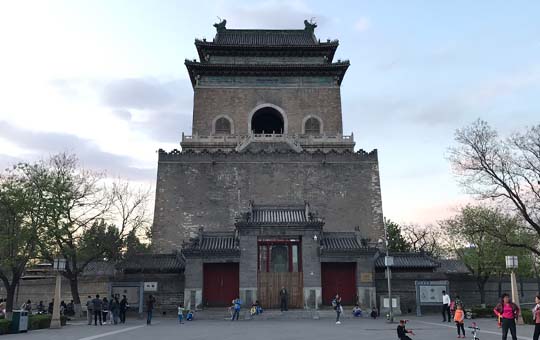 Although the Bell and Drum Towers are now dwarfed by Beijing's skyscrapers, they are still the highest buildings in the area, and thus afford nice views over the Beijing's traditional hutong neighborhood. The views from the Bell Tower are considered a bit nicer because you can walk the entire 360 degrees around the tower and enjoy views in all directions.

The highlight of the Drum Tower is the drum show performed every hour. Be sure to check the showtimes below and arrive a little early. The performance only lasts about 5 to 10 minutes and you will have to wait another hour if you miss it.

Be aware that going to the top of both towers requires climbing about 70 steep steps on a continuous staircase, so this is not recommended for people who are unfit or have mobility issues. Be sure to wear comfortable shoes as well.

The small square between the two towers is a gathering place for the local elders and children who live in the surrounding hutong neighborhood, especially in the evening. If you have time, you can spend some time there and soak in the charming local atmosphere.

The Bell and Drum Towers are usually visited by travelers before or after a tour of the surrounding hutongs. But if you don't have time or don't want to climb the stairs after a hutong tour, you can skip the towers without missing much.