This part of Shanghai, which covers several blocks to the west of the Bund, was once a foreign concession under French possession from 1849 to 1943. From its time as a European district to now, the French Concession has maintained its reputation as a high-end shopping and dining area. Today, it is a popular destination for tourists due to its charming tree-lined avenues, European cafes, and quirky shops. 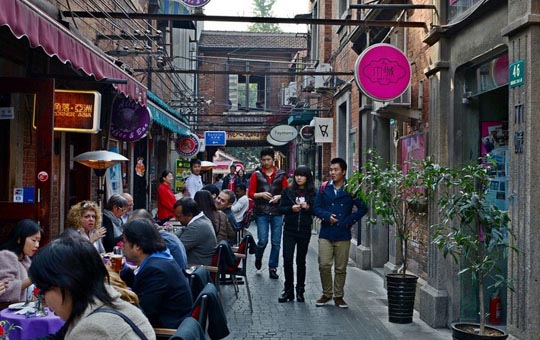 Many visitors to the Former French Concession head to Tianzifang, a historical area made up of traditional alleys and shikumen homes with over 200 diverse small businesses including cafes, restaurants, art galleries, craft stores, and studios. Even though you'll find many souvenir shops here, the area has not been overly developed and maintains much of its historical charm. It is distinctly different from Xintiandi, another popular destination in the vicinity, in that it has managed to preserve a residential feel, adding to its appeal.

Tianzifang is also home to an emerging coffee culture, making it a great place to enjoy a caffeinated beverage while people watching and taking in the unique surroundings.

Average time for this activity: 1 hr

The place to see and be seen in Shanghai, Xintiandi is a trendy pedestrianized shopping street that is perfect for an afternoon stroll, particularly if you're looking to rub shoulders with Shanghai's rich and fabulous.

Traditional shikumen houses have been converted into quirky art galleries, boutique shops, and swanky bars, combining the style and glamour of 1920s Shanghai with the modern luxuries of a 21st-century megacity. The First Congress Hall of the Communist Party of China can also be found in Xintiandi inside a beautiful shikumen building on Xingye Road.

Average time for this activity: 1 hr