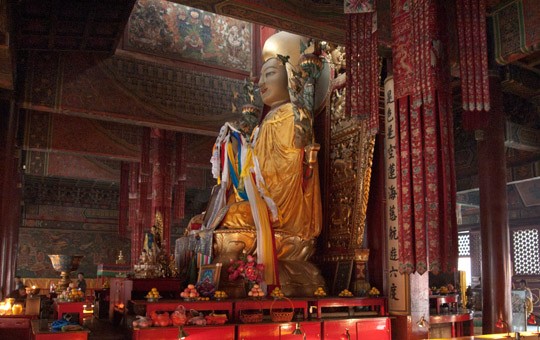 Lama Temple was originally built at the end of the 17th century as an imperial residence, but it later became a lamasery in 1744 and is now one of the most famous Tibetan Buddhist temples outside of Tibet. The temple features five large halls which house a treasury of Buddhist art, including sculptured images of gods, demons, and Buddhas, as well as Tibetan-style murals.

If you only have time to see one or two temples while in Beijing, we highly recommend fitting in a visit to the Lama Temple, also known as Yonghe Temple, Harmony and Peace Palace Lamasery, or Yonghe Lamasery. A world-famous temple of the Yellow Hat sect of Lamaism, the Lama Temple is the largest and best-preserved lamasery in China. Its elaborate construction, including sweeping tile roofs, decorative archways, and imposing statues, along with its vivid history, make this gorgeous temple well worth a visit during your trip to Beijing.

Upon entering the temple through the Zhaotai Gate, you will come to Devaraja Hall, or the Hall of the Heavenly Kings, which was originally the main entrance of the temple. This hall contains stunning statues of the four heavenly kings located on each wall. From here, visitors pass through Great Stele Pavilion and past Xuyu Hill to reach the main palace, the Hall of Harmony and Peace or Yonghegong, which contains three large Buddha statues.

Another key feature of the Lama Temple is the larger-than-life bronze statue of Tsong Khapa, the founder of the Yellow Hat sect, which you will find in the fourth hall from the entrance, the Hall of the Wheel of the Law. The final hall, the Wanfu Pavilion, contains an impressive, 18m-high Maitreya statue carved entirely out of a single sandalwood tree, the world's tallest Buddha statue made out of a tree, which is included in the Guinness Book of World Records.

The Lama Temple is an active Buddhist temple where you can see monks going about their daily activities, as well as civilians burning incense and praying. On the first and fifteenth day of every lunar month, the temple holds religious ceremonies, during which you can watch lamas praying and chanting if you go early. Many locals also go to the temple to pray on these days, which can make the temple quite crowded. At other times, however, the temple is usually not that crowded compared to Beijing's other famous landmarks.

Spring Festival, or the Chinese New Year, is definitely the busiest day of the year. Many visitors wait in line long before the temple is open. We strongly advise against visiting Lama Temple on this day. (Read our tips for avoiding the crowds when traveling in China here.)

Visitors are not allowed to bring their own incense into the temple for environmental reasons. Instead, each visitor can get one free, environment-friendly bundle of incense sticks at a window next to the entrance gate. There are signs in English providing instructions on how to burn or lay the incense as a tribute to the Buddha. Don't be afraid to get your bundle of free incense and join the praying locals; doing so can be a special experience for visitors to this famous sacred site. Be aware that the burning incense may be unpleasant for those who are sensitive to smoke or strong smells.

The temple is not large and the walk is very manageable. Most people stick to the main halls along the central axis, but there are also smaller buildings at the sides that house some nice statues, which you can visit if you have the time. Please note that visitors are not allowed to take photos of the Buddha statues.

The Lama Temple is full of history and religious significance. To get the most out of your visit, you can rent an audio guide for 50 RMB or hire a licensed guide.

The area outside the temple hosts sellers of various souvenirs. Be sure to negotiate for a good price.

The Lama Temple is easily accessible by subway. You can get there via Beijing Subway Line 2 or 5, get off at Yonghegong station, and exit from Exit F.

The Confucius Temple is a few minutes' walk from the Lama Temple and is worth a visit if you are interested in seeing more of Beijing's temples. The hutong area near the Lama Temple is also a nice area to stroll around and get a glimpse of local life.