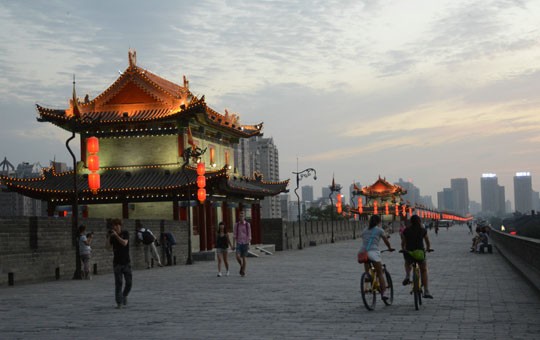 Originally built in the 14th century by the first emperor of the Ming Dynasty, Xi'an's large, rectangular city wall is an impressive sight and an unmissable stop on any itinerary in Xi'an. It is considered the best preserved city wall in China and is a UNESCO World Heritage Site. With the old portion of downtown Xi'an within and modern buildings lining the outside, Xi'an's city wall is a great place to stroll or bike and soak in the historic atmosphere of this ancient city.

Located right in the heart of Xi'an, the rectangular-shaped city wall is 13.7 kilometers long and completely encloses the old city center. As a defense fortification, the wall features a moat, drawbridges, watchtowers, parapet walls, and large gate towers.

Among the four gates of the rectangular wall, the South Gate (also known as Yongning Gate) is the most magnificent and beautifully decorated, and thus is the main gate for visitors to start their tour of the city wall. Along the top of the wall is a walkway with a width of 12-14 metres (39-46 ft). Bikes are available for rent on the wall. It is nice to stroll along the wall, but if you want to cover a longer distance, we suggest you cycle. The entire city wall typically takes 1.5 to 2 hours to cycle. Electric cars are also available for riding along the city wall. 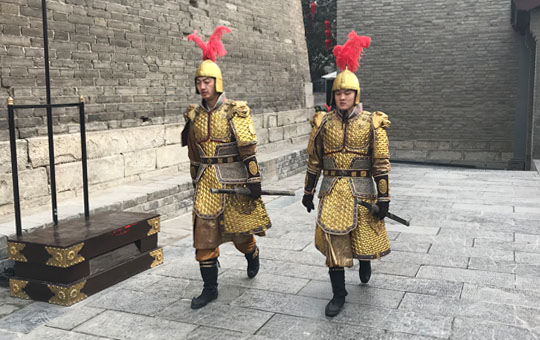 While you are on the wall, in addition to appreciating this magnificent military structure, you can also take in some nice contrasting views of the old inner city and the modern city beyond the wall. There are also performances at certain times at the South Gate demonstrating how the armored guards patrolled and opened the gate in ancient times. In addition, the watchtowers and other buildings on the wall are lit up at night, making the city wall even more beautiful.

There are shops on the wall, where you can buy snacks and water, as well as restrooms. There isn't much shade on the wall, so be sure to wear a hat and/or apply sunblock.

There are many steps leading up to the wall at the South Gate. No ramp or elevator is provided, but a stair lift might be available for wheelchair users, so please ask the staff if you need one. Once you are on the wall, the walkway is quite flat and easy to navigate for wheelchair users.

The South Gate can be easily reached by subway line 2 and various buses.

The Bell Tower, Drum Tower, and the Muslim Quarter are all close to the South Gate of the city wall. These can be easily fit in to your itinerary before or after your visit to the City Wall.