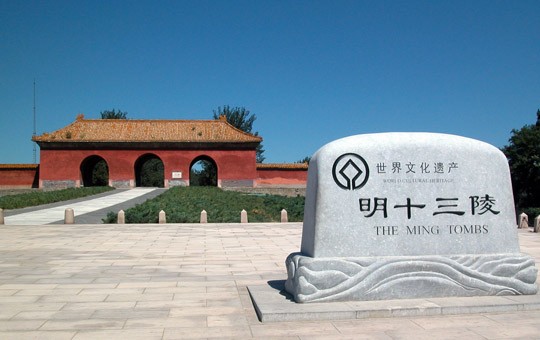 The Ming Tombs complex houses the mausoleums of thirteen Ming Dynasty emperors, situated within a valley 50 km outside of Beijing. Because of its rich history and beautiful architecture, the Ming Tombs were designated a UNESCO World Heritage Site in 2003. Due to the site's historical significance and proximity to downtown Beijing, the Ming Tombs are a popular tourist site and offer an unparalleled glimpse into China's past.

Of the sixteen emperors who ruled during the Ming dynasty (1368-1644), thirteen are buried in the Ming Tombs complex outside of Beijing. The site selection, layout of the tombs, and design elements were carefully selected using feng shui principles with the aim of bolstering the good fortune of the Ming Dynasty. Today, three of the tombs are open to the public: Changling Tomb, Dingling Tomb, and Zhaoling Tomb, with Dingling and Changling receiving the most visitors.

Changling, the tomb of the third Ming ruler, Emperor Yongle (reign 1402-22), is the largest and oldest among the thirteen mausoleums. It features some impressive halls and palaces, one of which houses a large stone statue of the Yongle Emperor himself and a small exhibition of clothes and artifacts.

Dingling, the third largest of the mausoleums, was the burial place of the Wanli Emperor (reign 1572-1620), his wife, and his favorite concubine. Construction of the burial chamber commenced before the emperor was even twenty years old, and the amount of work and money that went into its construction is evident. Dingling is the only tomb that has been fully excavated, so you can access the tomb, which consists of a large underground palace built entirely out of large stone bricks without the use of pillars or beams. The coffins and cases you see in the underground chambers are actually replicas, as the original ones were partially decayed at the time the tomb was opened. The Museum of the Ming Tombs, which is just outside the Dingling Tomb, houses a large collection of precious funeral objects excavated from the Dingling tomb, including two imperial crowns. Dingling, including this nearby museum, is commonly considered the best to visit of the three accessible tomb sites.

Before you reach the tombs, you will first pass the Sacred Way, a long, straight path flanked by statues of ancient government officials and animals that leads to the imperial tombs. The Sacred Way was once known as the road to heaven, by which the emperor would return to the heavens after death, and its impressive statues are very well preserved. The road begins at a large memorial archway called the Great Red Gate, one of the largest stone archways in China, which was originally built in 1540. We suggest you stop for a short peaceful walk along the Sacred Way on your way to the imperial tombs.

Because the Ming Tombs are located outside of the city, we recommend seeing them in conjunction with a visit to the Great Wall. Both the Mutianyu and Badaling sections of the Wall are within a short drive from the Ming Tombs.

Although the Ming Tombs are an extraordinary representation of traditional Chinese funeral architecture and culture, to most people the tomb buildings are very similar to the halls and palaces found in the Forbidden City or the Temple of Heaven. If you are only in Beijing for a day or two, you can skip the Ming Tombs without missing much.

The Ming Tombs are home to a lot of history and culture, and it is ideal to hire a guide explain the site's significance to you. However, if you are participating in an organized tour, please make sure that your tour guide takes you to one of the tombs. Because the Sacred Way and the tombs are all separately ticketed, some cheaper tours only take you to the Sacred Way and skip the tombs in order to lower costs. At The China Guide, we make sure to include visits to both sites.

Be sure to wear comfortable shoes, as exploring the tombs requires a lot of walking.

It's possible to get to the Ming Tombs via public transport from Beijing, but unless you have a lot of time, hiring a car and driver or taking an organized tour is ideal, since the tombs are located on the outskirts of Beijing and transport is required between the tombs and the Sacred Way.