Everything You Need to Know about Chinese Toilet

Is it easy to find a public toilet while traveling around China? Are all toilets squat style? Are the public toilets smelly? These questions plague many travelers to China, but never fear: this article will set straight your expectations about toilets in China.

While people may still tell you outrageous stories about using toilets in China, in reality, they have come a long way in the past decade.

Following several major pushes by China's National Tourism Administration and local governments, most public restrooms in big cities and at major tourist attractions are modern and have an attendant who practically lives there to keep them clean. Almost all Chinese public bathrooms are free; some may charge a small fee. The only thing you need to be aware of is that you should carry tissues and hand sanitizer with you, as free toilet paper and hand soap are not the norm for public restrooms. 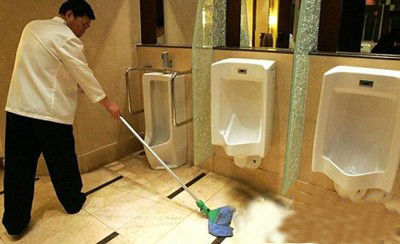 If you plan to visit smaller cities or tourist attractions in less developed areas, be prepared to encounter some more primitive restrooms. For example, in Tibet, most public toilets are in primitive condition and usually charge a fee for people who use them. Some toilets in rural areas may even be open to the elements. (Note: Since 2017, the Tibetan local government has started a toilet "revolution." Now, more and more popular tourist destinations have modern toilets, including Potala Palace) 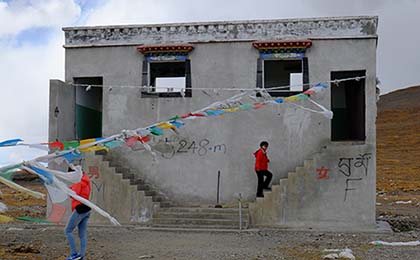 A toilet in Tibet sitting at an altitude of 5,248m 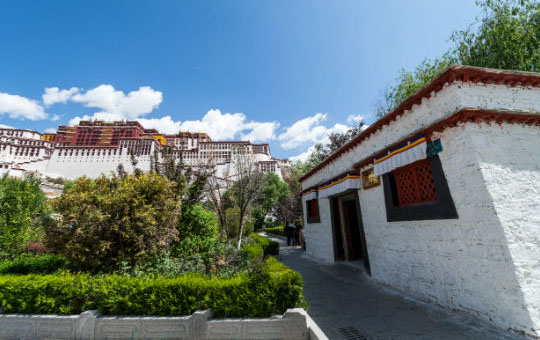 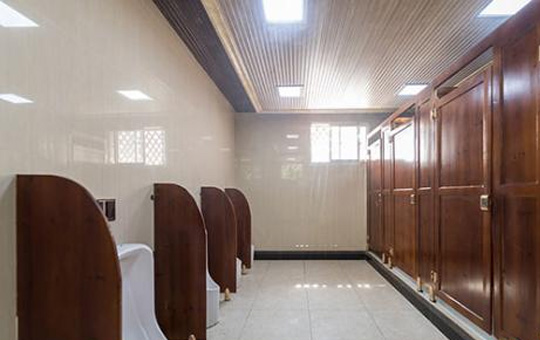 A modern toilet at the foot of Potala Palace

Chinese toilets are normally squat style, which admittedly take some getting used to. However, comfort yourself in the knowledge that using a squat toilet means you don't touch anything and you don’t have to cover the toilet seat with paper before you can sit down. Studies have even shown that using squat toilets is beneficial to your digestive health. 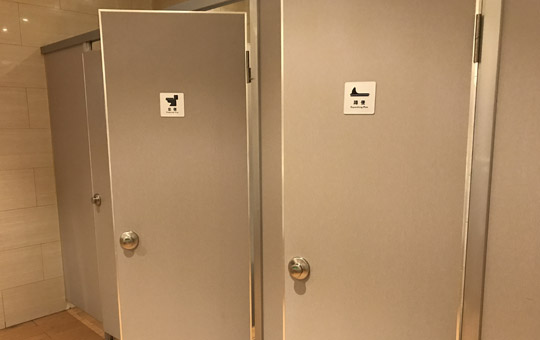 A public toilet with both Western-style and squat toilets

In big cities, most toilets have cubicles with separating walls and a door that offers complete privacy. However, some toilets in the old areas of big cities and many toilets in smaller cities only have a waist-high divider to give restroom users some privacy. Some restrooms even lack these frames and have no dividers between toilets; there's only a row of squat toilets and that's it.

Most Chinese people in big cities won't blink an eye if you come in and use the squat toilet right next to them. Nevertheless, be ready to receive some stares if you're in a smaller city or town where Chinese people don't see foreigners that often. 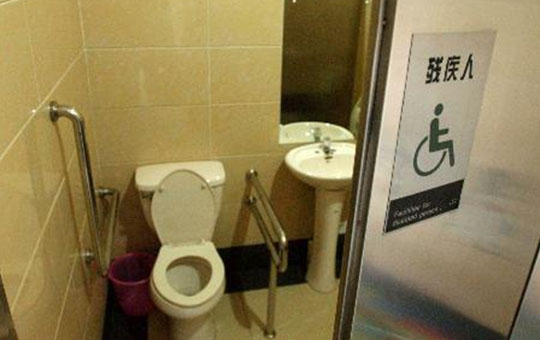 How to Find a Public Restroom in China

If you are on one of our guided tours, ask your guide to keep a lookout for a restroom and they can usually find you a good option. However, if you are traveling on your own, here are some tips for spotting a bathroom in China.

Public toilets in China are usually clearly signposted. The characters “公厕” (gong ce) literally mean "public toilet." In English, it is usually written as WC. You might see it on a signpost at an intersection or on the side of a building. For example, there are plenty of public toilets in Beijing if you keep your eyes open for signs like the one below. 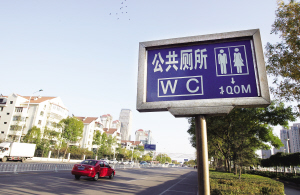 If you cannot find a public toilet around you, there are other places you may take advantage of. One choice is surrounding business buildings, such as office buildings and shopping malls, which usually have clean public bathrooms. KFCs, McDonald’s, and other restaurants could also be a good choice.

Like anywhere else in the world, most restrooms are clearly marked "male" and "female." Nevertheless, it might be helpful for you to memorize the characters below so you can recognize which toilet is which. 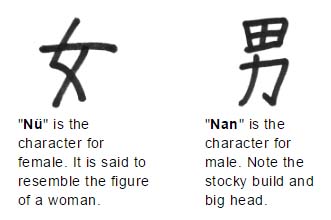 Toilets in China vary greatly, which is probably why the government has started rating them with stars and handing out awards. We've never seen any awarded less than three stars — one- and two-star toilets don't seem to get labeled. 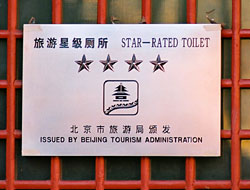 One of the requirements for public restrooms to receive a top rating is to have toilet paper. So, wherever you see a triple-star restroom, your chances of finding toilet paper will be quite high.

China's first "toilet revolution" took place in Beijing in the 1980s. The latest intensive effort to improve the nation's facilities started in 2015. As of the end of 2017, 68,000 toilets around the country have been constructed or reconstructed.

Today, Beijing has some of the most advanced restrooms in the country, including one equipped with personal TVs, charging stations, Wi-Fi, ATMs, and relaxing music. As you can imagine, this particular restroom has become a tourist attraction in its own right. Shanghai has also stepped up its restroom game by opening its first gender-neutral public toilet.

Most public toilets in big cities and at popular tourist attractions are clean, free, easy to find, and conveniently located in China. However, many parts of China are still developing, which means that the types and cleanliness of public toilets aren't completely uniform. Nevertheless, as with all things when you are traveling, remember to keep an open mind.